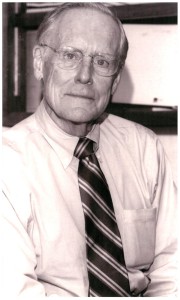 We are sad to announce that Frederick M. Myers, Jr., our firm’s founder and a prominent and well-respected member of the Massachusetts Bar for over 50 years, died on February 27, 2016.

On January 1, 1964, Lincoln S. Cain, Stephen B. Hibbard and Fred formed Cain Hibbard & Myers, with offices at 7 North Street. After a gas explosion damaged the 7 North Street building in 1970, the firm moved to 184 North Street and then, in 1988, to the newly constructed Tierney Building at 66 West Street. In 2014, Cain Hibbard & Myers, now with offices in Pittsfield, Great Barrington and Williamstown, celebrated its 50th anniversary.

Fred was a leading trial and corporate lawyer in the Commonwealth from 1950 until he retired from active practice in 2006, and he had a long and distinguished career with wide experience in corporate and business litigation. He was well known and widely admired for tenacious advocacy and his unparalleled work ethic. It was said that Fred, at 7 North Street, and Francis J. Quirico (later a Justice of the Supreme Judicial Court), at 28 North Street, kept eyes on the other’s lighted windows at night to see who would be the first to finish for the day. Fred was elected a fellow in the prestigious American College of Trial Lawyers and served as a special justice in the Southern Berkshire District Court, having been appointed to that position in 1971 by Governor Francis Sargent.

In addition to his law practice and leadership of Cain Hibbard & Myers, Fred was active in the world of business, serving on the Boards of Directors of Lukens Steel Company (Chairman of the Board), Newport Pharmaceuticals, Inc., the Holland Company and The Clark-Aiken Company.

Fred was the attorney for The Clark-Aiken Company in the landmark 1975 Massachusetts Supreme Judicial Court case establishing the doctrine of strict liability in Massachusetts against hazardous activity.

Fred was a prototypical New Englander, committed to excellence, succinct in speech, spare and no-nonsense in manner, dismissive of frills and adornment, and quietly dignified. He was always the first lawyer in the office each morning, finishing the New York Times and Wall Street Journal before starting his day at about the time the other lawyers arrived.

Our mentor and dear friend, we were all privileged to know and work with Fred, and his leadership guides us still.